Skip to content
Call Us: (+33) 1 64 62 10 12
Croissy-Beaubourg and Montpellier, November 28, 2016 – THERADIAG (ISIN: FR0004197747, Ticker: ALTER), a company specializing in in vitro diagnostics and theranostics, has announced that it has won the “Exporter” award from the Ile de France Chamber of Commerce and Industry. The prize is awarded to companies that have achieved strong growth in foreign markets for at least three years. Theradiag’s international presence has continued to evolve since the launch of its export business in 2000, with new markets opening regularly for the LISA TRACKER® range. Exports currently account for 42% of the company’s total revenues. With sales in over 40 countries, Theradiag is present in the largest biotherapy user markets including the United States, Australia and most European countries. The first four tests from the LISA TRACKER® range were launched in the US market in June as part of the licensing agreement with Miraca Life Sciences[1]. This launch represents a major stage in Theradiag’s export strategy and a significant growth driver for the years ahead, particularly following the agreement signed with pharmaceutical company Janssen. Theradiag’s worldwide presence in theranostics: 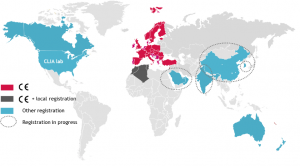 Percentage of revenues generated from exports:

About Theradiag Capitalizing on its expertise in the distribution, development and manufacturing of in vitro diagnostic tests, Theradiag innovates and develops theranostics tests (combining treatment and diagnosis) that measure the efficiency of biotherapies in the treatment of autoimmune diseases, cancer and AIDS. Theradiag notably markets the Lisa Tracker® range (CE marked), which is a comprehensive multiparameter theranostic solution for patients with autoimmune diseases treated with biotherapies. With its subsidiary Prestizia, Theradiag is developing new biomarkers based on microRNAs for the diagnosis and monitoring of rectal cancer, auto-immune and inflammatory diseases and HIV/AIDS. Theradiag is thus participating in the development of customized treatment, which favors the individualization of treatments, the evaluation of their efficacy and the prevention of drug resistance. The Company is based in Marne-la-Vallée, near Paris, and in Montpellier, and has over 75 employees. For more information about Theradiag, please visit our website: www.theradiag.com Investor Relations Fabienne François CFO Ph: +33 (0)1 64 62 10 12 contact@theradiag.com NewCap Financial Communications & Investor Relations Valentine Brouchot Ph: +33 (0)1 44 71 94 94 theradiag@newcap.eu Alize RP Press Relations Caroline Carmagnol / Florence Portejoie Ph: +33 (0)1 44 54 36 64 theradiag@alizerp.com
[1] See press release of June 16, 2016: LISA TRACKER® launched in the US market.

REGISTER FOR OUR LATEST NEWS

No event found!
Load More
We use cookies to ensure the best experience on our website. If you continue to use this site, we will assume that you are satisfied.OkNoLearn more
Revoke cookies