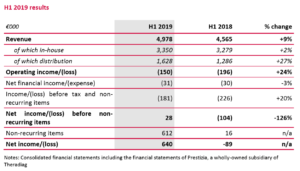 Bertrand de Castelnau, Chief Executive Officer of Theradiag, commented: “Theradiag’s first-half results and business activity are in line with our expectations, although we remain vigilant at this time of the year as 2019 is a year of recovery but also of further investment. Our clear priority is to return to profitability and, in this regard, Theradiag is focusing on its potential growth areas, adjusting its product mix and broadening the international scope of its solutions, in particular theranostics, with our LISA TRACKER® kits for routine use. We are pleased to report that, where the business model is in place, results are tangible and growth is strong.”

Pierre Morgon, Chairman of the Theradiag Board of Directors added: “We have benefited from extraordinary income related to non-recurring sales over this period. Combined with the implementation of promising strategic partnerships, this will allow Theradiag to invest in order to step up growth in key strategic markets, particularly the United States, whilst maintaining operational profitability and improving it over the medium term. This is a crucial period for the company and one to which we are paying special attention.”
Strong revenue growth in theranostics driven by LISA TRACKER® sales
Theradiag posted first-half 2019 revenues of €5.0 million, up 9% from €4.6 million in H1 2018.
Theranostics performed well and posted a 12% growth, primarily driven by LISA TRACKER® kits for routine use, for which sales exceeded €2.0 million during the period (vs. €1.8 million in H1 2018). Sales in France in this segment were up sharply.
Sales generated through the distribution channels were up 27% compared to the same period last year, in line with the recently implemented distribution strategy and partnerships.
The partnership entered into with IDS during the first half, covering R&D and the exclusive distribution of TRACKER® kits in 33 new countries (including Germany, Latin America and the Middle East) is well underway and is progressing according to plan. The development of the next generation of automated technologies is making progress and will speed up the automation of diagnostics and enable greater flexibility. Regarding the marketing of the innovative TRACKER® range, training sessions have begun in certain priority areas and are being rolled out as planned. The launch of operations in the United States with our new partner HalioDx is well underway.
The Diagnostic In Vitro (IVD) business posted first-half revenue of €2.9 million, up 7%, including significant non-recurring instrumentation sales. This historical business line continues to benefit from the Group’s recognized innovation expertise among laboratories, but does not have as much potential as theranostics. The strategy in place for these global immunology solutions is to continue targeting
niche specialties, such as genetics and male fertility, and to support internal and external quality control programs. This does not require any particular investment commitments.
Operating expenses under control, improvement in operating income and net income
The company is maintaining tight control of operating expenses after the major endeavors made over the past 18 months.  Organization has become more efficient and business volumes have increased whilst staff expenses have remained stable.
The operating loss decreased by 24% to €150 K, due to the increase in sales and careful management of operating expenses, despite large investment in R&D.
The loss before tax and non-recurring items amounted to €181 K compared with €226 K in first half 2018, representing a 20% improvement.
As noted above, extraordinary income is related to significant non-recurring instrumentation sales.
Net income before non-recurring items was just over breakeven at €28 K, compared to a €104 K loss in first half 2018.
Net income including non-recurring items amounted to €640 K, compared to a net loss of €89 K in H1 2018.

Cash position
At June 30, 2019 the Group had net cash of €3.2 million, compared to €3.4 million at December 31, 2018 and €3.7 million at June 30, 2018. The company continues to pay close attention to cash flow and estimates that it has sufficient cash for upcoming investments.
Investment in R&D remains of prime importance for development strategy in Theradiag’s business sector. This is set to continue, and the non-recurring income for this period and resulting cash will be used to invest in the future and step up the commercialization of theranostics solutions in key international markets, in particular the United States.

Signing of a development and distribution agreement with Immunodiagnostic Systems (IDS)
In April 2019, Theradiag signed an agreement with IDS, a specialist manufacturer of diagnostic test kits and instruments for the clinical market. Under this agreement, IDS will market TRACKER® kits in 33 countries, including Germany and Latin America, while Theradiag will have access to the latest-generation IDS-i10® analyzer, renamed iTrack 10 TM .
Manufactured by IDS for Theradiag, this cutting-edge automated analyzer will be the first model compatible with the biotherapy monitoring product range. This innovative chemiluminescence-based technology platform is entirely automated and offers continuous loading. It allows random access analysis and can be integrated into laboratory automation systems.

Signing of an agreement with HalioDx
In order to boost the commercialization of its range of biotherapy monitoring tests in the United States, Theradiag signed a new agreement with HalioDx in May 2019.
Under this agreement, HalioDx will handle the supply chain including sample reception, test performance and invoicing on behalf of Theradiag.
Theradiag will coordinate promotional campaigns, which will allow it to control its development in the US market more tightly and proactively while favoring direct interaction with hospitals, US health authorities, pharmaceutical companies, opinion leaders, trade bodies and patients’ advocacy groups.
In order to meet the specific needs of the US market and strengthen the Theradiag brand in United States, the Theradiag tests range will be rebranded OptimAbs TM by Theradiag.

Change of Board member
Theradiag announces that John Li, Board member since 2017, resigned his post on September 17, 2019 with effect from September 19, 2019. At its meeting on September 20, 2019, the Board of Directors appointed Geija Ouyang to replace Mr. Li for the remainder of his term of office, i.e. until 2020 following the General Meeting called to approve the financial statements for the year ended December 31, 2019. Mr. Ouyang is a graduate of the Ecole Nationale des Ponts et Chaussées and Imperial College London. He has extensive experience in banking and finance, in particular in the areas of mergers and acquisitions.

About Theradiag
Capitalizing on its expertise in the distribution, development and manufacturing of in vitro diagnostic tests, Theradiag innovates and develops theranostics tests (combining treatment and diagnosis) that measure the efficiency of biotherapies in the treatment of autoimmune diseases and cancer. Theradiag is thus participating
in the development of customized treatment, which favors the individualization of treatments, the evaluation of their efficacy and the prevention of drug resistance. Theradiag notably markets the Lisa Tracker® range (CE marked), which is a comprehensive multiparameter theranostic solution for patients with autoimmune diseases treated with biotherapies. The Company is based in Marne-la-Vallée, near Paris, and has over 60 employees.
For more information about Theradiag, please visit our website: www.theradiag.com

REGISTER FOR OUR LATEST NEWS

No event found!
Load More
We use cookies to ensure the best experience on our website. If you continue to use this site, we will assume that you are satisfied.OkNoLearn more
Revoke cookies